I got an email from Audi Estonia saying they have few open spots for Audi Driving Experience with new R8 and RS5 models. That sounded like lots of fun and I signed up. As i have attended many trackdays at auto24ring myself I was little unsure how much will they let to push the cars….but they did! The evant began with quick intro by Audi Experience team members, some words of precaution as the cars do have over 600bhp and off we went.

Firstly it was time to learn parts of the track so it was dividend into three sections and each driver could pass one section four times. This was first kind of approach for me and I liked it very much. During the tesing we had to drive back “wrong way” and that was pretty bizarre if You have driven only one direction before. It was like being on a totally new track…

After we had lapped all parts of the track it was time for little break and get ready for full laps. I managed to be one of the first ones to do a full lap before it started raining and that was lots of fun! The car pulled really hard and stopped well even we had street tires on. I wish I could get a lap while transponder is on the car but maybe in futuure. The steering Wheel had all the necessary buttons to change driving modes, turn up the engine sound and change volume 🙂 Seating position was good but I would bring out one thing that bothered me. Maybe I havent driven too many of these fast cars but Audi has Wheel arch coming in right where left leg is resting so that moves the leg position very close to break pedal which was little weird for me. I had a chance to drive Porsche 911 GT3 few weeks back and it was good comparison for me. I can’t say which was quicker but my money goes on GT3. Despite that Audi R8 is incredibly easy to drive. In that sence I think GT3 was more raw and needs more experience. So for daily driver who wants occasional track fun I’d say go with R8 but for more serios enthusiast GT3

The organizational side of the event was very good, no delays and all staff was proffessional – German precision 🙂 If You get an invite to such event don’t hesitate to go! 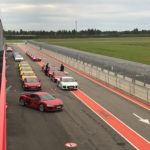 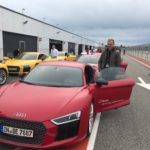 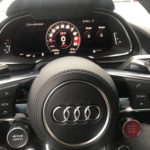 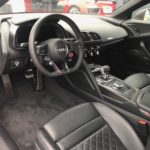